The Verging Cities by Natalie Scenters-Zapico

Natalie Scenters Zapico shares a visceral collection of poems titled The Verging Cities about El Paso, Texas and Juarez, Chihuahua in Mexico. These two cities are always counted as “sister cities” and I lived there in the late 1990’s to early 2000’s. Her work describes the blood-throbbing pulse of the Border and is not for the faint of heart. From tender lovers to the dust storms to the blood shed on the sands, it is all here. I have a personal, deep love for this collection as it reminds me of home once-upon-a-time and she doesn’t sugarcoat anything that has happened and is happening in the Borderlands. I chose the grittier, tougher poems because I think it’s important that poetry doesn’t always speak to the romantic side of life. Sometimes you need to be shaken awake and that is why I chose these:

After I Read Your Obituary

you crawl into bed with my husband
and me. Your body is smaller
than I remember. I hush your voice

when you complain: The aloe vera
in the pot is made of plastic.
Your breathing grows, a weed

in monsoon—you whisper: Mother,
father, and sister fell open as birds
in their chairs when they were shot

at dinner. You show me how
you dove under the table, felt specks
of their blood on your lips before

seeing the scuffs on your father’s leather
shoes. As you measure the depth
of my weatherproof windows,

you tell me you buried your family
in the walls of an abandoned
restaurant. With the tip of the plastic

succulent I rub your swollen ears.
I tell you: In this new country I am worse
than the city of thousands dead;

I am a wound red with iodine. My husband
wakes and I beg him for water
I’ve never known to taste so clean.

This poem captures the truly random and senseless violence across the Border in Juarez. It wasn’t unheard of (and perhaps still happens) for family get-togethers to be interrupted by gunfire. For no reason that anyone could see. Here, the poet draws the experience of a young survivor into her midst. The child tests the safety of the home in El Paso, referenced by the poet as “In this new country…” Can you ever really protect someone? The water at the end of the poem is almost baptismal of a new life in the U.S. for a clean, fresh start.

The tree hangs brown pears over his head.
From his pores white snakes pop. They swim
down his face to turn the soil. His tongue lies
in blood that’s collected between his teeth.
He swallows red until he cries it. Streams run
around his nostrils; they bloom into a field
of roses at his chin. Birds perch on his gums
and drink the salt of him. His body, three feet
away in a cooler, rots with two beers and a knife.
His wide eyes are bruised and have turned black.
A girl comes to climb the tree for fruit and shakes
at each branch. The birds, scared, fly into the tree.
She opens the cooler, she covers her face, she
vomits. She looks at his head and says, Un hombre.

There are fields of dead buried, it is not unheard of that a child would happen upon such a victim that may have been trying to cross into the USA. Scenters-Zapico captures the vivid decay of the victim , the animals and insects at work to break the head and body down. The beers and knife kept in the cooler with the man’s head shows the desensitization of the killer, whoever the killer may be. A gruesome reality revealed by the writer.

Angels Fall From The Sky to El Paso, Texas

I wonder what he sees first: a building,
perhaps a bank of windows cutting
into the sky. Or a road, a freeway stitched
with cars so small it looks like a fine
embroidered curtain. And Angel,
what do you think of? Do you think:
This is me—dying in the sky? Do you
scream to God? Do you tell him,

you are not that kind of Angel? Do you say:
I am merely a man named Angel—
I have no wings to fly. And when he does not
listen, do you scream or close your eyes

and unwrap the gift of gravity? That pull,
that tug of organs. And Angel,
do you see me? Just before you hit
the middle of five o’ clock traffic?

Running on the sidewalk searching
each body as they hit the ground
for any one of them that might be you?
A city of fallen angels, each one a collection

of human arms, and legs, a torso, and
bleeding mouth. I knew when immigration
arrested you, when I had to pay a fine
for ever having loved you, that they would

take our one bedroom, our washer and dryer—
anything of value. But how was I to know
that even God would push your frail form
from the sky? So when I find

your body naked, your skull cracked
in shards across the tar, I take
my clothes off and cover you.
You whisper: I can’t die here, I wanted

to fall on the live side of the border.
And I know it isn’t your voice
I’m hearing but I take your severed hands
and carry them across to Juarez anyway.

I breathe bone as I cross—your blood running
to my elbows. I breathe. I breathe
to exchange your body for an explanation.
I breathe. No one says a word; I breathe.

For those who may not know: Angel is a popular name for men, pronounced “Ahn-hel.” Whether the Angel is a reference to heaven or to a man, or a combination is open to interpretation for the reader. Here, I imagine a loved one being found dead from injuries as a result of sinister patrol officers who didn’t get a bribe in time. An immigrant dropped from a building. The poet brings us to the side of the victim and brings honor to the dead by way of bringing the parts of the body she can carry across the Border into Juarez, Mexico. Most likely this is so the victim will be brought to their home country. Vivid, heart wrenching language that captures my attention.


As I said, I picked the grittier side of the collection, there are also poems of tenderness and love, the battle of identity, and more. You can find Natalie Scenters Zapico on Facebook as well as search reviews and readings on-line. If you were moved by these poems, you can purchase The Verging Cities by Natalie Scenters Zapico for your Kindle or in Paperback at: https://www.amazon.com/Verging-Cities-Mountain-West-Poetry/dp/1885635435 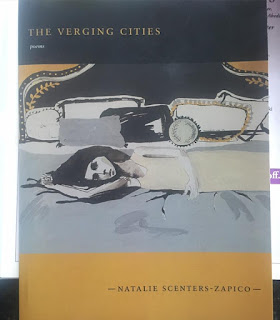 Thanks always for reading, please drop by again soon…

Posted by Poet Hound at 9:06 AM No comments:

Poet Hound
Is a blog dedicated to connecting people to poetry whether it be for the first time or attracting seasoned veterans. This blog is intended to be easy to read and understand, as well as concise. My work has been published by Nerve Cowboy, Poiesis, and my chapbook Agapornis Swinderniana is published by Dancing Girl Press as of February 2012. My chapbook Sister, Blood and Bone is published by Blood Pudding Press as of 2013. You can now contact me at: poethoundblogspotATyahooDOTcom You may address your e-mail to Paula Cary You can also join me on Facebook, just type in "Poet Hound" in the Facebook Search box.